What would a great celebration be without a toast of festive holiday drinks this season? Christmas only comes once so eat, drink, and be merry at the bar and lounge of The Ritz-Carlton Macau, accompanied with three of their Christmas specials available only this December. Indulge yourself and be amazed as your surroundings transform into another world with just a sip of their cocktails.

Drinking eggnog is a compulsory Christmas tradition in the United States and Canada. And if you want to know what eggnog tastes like try the “eggnog special” bearing its name. Based on bourbon whiskey, cream, milk and an ingredient that binds everything together—the egg yolk. It is served in a tall glass with a block of ice and garnished with grated nutmeg, a killer for the ladies as they say that this is a pretty-looking cocktail having a taste similar to the Baileys drink and who doesn’t love Baileys? Especially when you can have more of it with spices of cassia, cinnamon, and nutmeg.

Do we have any Harry Potter fans out there? This drink is akin to the famous butter beer, switching beer with rum by Captain Morgan and mixed with ripe apple juice, butter spiced with nutmeg, cinnamon, and brown sugar then served warm in a glass teacup cup garnished with star anise. This bad boy has a sweet, creamy, and cookie-dough-like fragrance and a butterscotch flavor with a little touch of the rum. It’s not hard to imagine drinking like a wizard at The Ritz-Carlton’s Bar and Lounge, having an exquisite ambiance with a vintage feel. Like its German translation Glühwein which means “glowing wine”, this drink certainly tastes like Christmas—with a cabernet sauvignon red wine as its base mixed with amaretto and a peel of an orange, heated but just to a simmer and served in a red wine glass. As you lift this beauty be prepared to have your esophagus filled with delight with an aroma like no other from cassia bark, cinnamon, juniper berries and star anise spices with a hint of citrus from its dried lemon garnish. It tastes as good as it smells. And don’t worry if your drink tends to cool down after a while just ask one of the bartenders and they will be more than happy to warm it up for you. 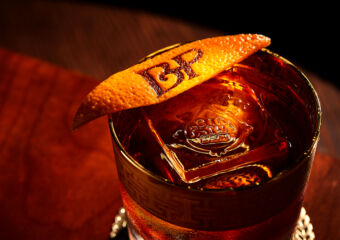