Have you ever wondered about Tap Seac Square’s history and what used to be there? We’re about to let you know all about the transformation and modifications this area has undergone since the start of the 20th century. This 13,000 m² area is the largest square in the city so read on and find out where Tap Seac’s name comes from and other interesting details!

From rocky to vast

The area we now call Tap Seac Square resulted from land reclamation that happened back in 1905. Today, Tap Seac Square is one of the most important landmarks in the city, and, with its 13,000 m² area, it is the largest square in Macau so far. Prior to the land reclamation, the space was occupied by a swamp surrounded by three large rocks which were also destroyed during the construction. The name, “Tap Seac”, translates into “stacked or piled rocks” and it may be related to the previous configuration of the area, as can be seen in George Chinnery’s (1774-1852)–renowned painter who lived in Macau and painted a lot of the city’s landscapes during the 18th and 19th century–painting below. After that, during the 1920s, several neoclassical buildings started being built as well as the football field. 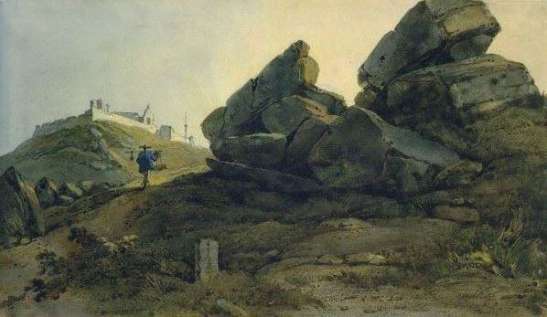 George Chinnery – Tap Seac (Guia Hill on the back)

Much more than a square

In 2007, the field gave way to what is now the square, designed by Macanese and Portuguese architects Carlos Marreiros and José Maneiras, and civil engineer Chui Sai Peng. It is surrounded by important historic buildings such as the Cultural Affairs Bureau, Macao Central Library, Macao Archives, the Tap Seac Gallery, and the Tap Seac Health Centre. The latter was also designed by Carlos Marreiros. It’s a contemporary interpretation of Macau’s neoclassical buildings featuring wavy glass suggestive of windblown cheongsams (Chinese traditional female dress) as well as the Glass House, another building designed by the same architect.

The urban planning of Tap Seac was meant to drive the crowds away from the Senado area, thus creating a second city center. These days the square has become a popular place for holding grand events due to its size. Events such as the Lunar New Year Fair and Tap Seac Art Fair are held here and attract a huge crowd. There’s also Tap Seac Craft Market and some other happenings. Tap Seac Square is now surrounded by beautiful, modern-looking buildings with a contemporary touch.

Carlos Marreiros, bringing Macau out to the world

Marreiros was born in Macau in 1957. He studied in Macau, Portugal, Western Germany, and Sweden, having returned to his homeland in 1983 where he founded his own studio. He is an architect but also an artist, poet, and cultural conservationist. Carlos Marreiros always had an active role in the local society, having participated since a young age in several public positions and representing several different areas.

He founded and was a Director of a Cultural Magazine RC Revista de Cultura, and also the President of the Cultural Institute, and of Macau Architects Association just to name a few. He was a teacher at the State University of Shanghai, University of Hong Kong, and the University of Macau, a speaker and guest teacher at Lisbon Technical University, California University, Milan University, and in many others in Asia, Europe, and America.

As an architect, he designed and built approximately 200 projects, many of those iconic ones in Macau, Hong Kong, China, Portugal, and Australia and he was responsible for the design of the Macau Pavillion at Shanghai World Expo 2010 which was inspired by the traditional rabbit lanterns, popular during the mid-autumn festival.

Also read: Carlos Marreiros and Art to Elevate the Spirit

This article was originally written by Rui Barbosa in 2016 and updated by Leonor Sá Machado in August 2021.