Macau might be a small region, but it sure is a hub for talented people, including artists from all walks of life and areas of knowledge. Here, we take a look at the most famous local artists one can find in Macau. They’ve had their works exhibited throughout the world and some are still practicing their art. We take a trip across painting, literature, theater, and fashion in 21st century Macau, so come with us and get to know Macau’s famous local artists!

Mio Pang Fei is a Chinese painter born in 1936. He studied in his hometown of Shanghai, where he later was a guest professor at the Fine Arts College of Shanghai University. He taught oil painting “a western art technique that his work assimilated with vibrancy and liberty of expression”, according to Creative Macau’s biography of the author. He started by studying engineering, later changing to fine arts at Fujian Provincial Institute. There, he noticed missing time frames in the teachings of Art History and so his curiosity led him to look for these missing pieces leading to him falling in love with the impressionism, fauvism and cubism art waves.

During the Cultural Revolution, his art was not well regarded by the government in charge, leading the painter to only produce ‘officially accepted’ art. After a troubled youth under this regime, Mio tried emigrating to the US and later Hong Kong, but neither was successful. Then, he moved to Macau in the 80s. Here, he kept doing his art, starting to combine both western and oriental styles and techniques. He is also strongly dedicated to Chinese calligraphy. In 2015, at almost 80 years old, the artist was invited to represent Macau in the Venice Biennale. The documentary Mio Pang Fei (2014), directed by Pedro Cardeira is worth a watch since it’s not just about art. It focuses on the main issues from those troubled times of Chinese history. Find out more about the movie here. Russian artist Konstantin Bessmertny found a home in Asia, now based in Macau. His surreal pieces of art portray humanity in an exquisite, unique and ironic way. He’s been capturing the imaginations of different members of society from all corners of the world, including from his home country of Russia. He was born in Blagoveschensk, the former USSR, in 1964, and graduated from The School of Fine Art in the same city he was born in.

With an extraordinary work portfolio ranging from painting to sculpture, illustration, and installations, Bessmertny is one of Macau’s most acclaimed contemporary artists, having participated in more than 50 exhibitions throughout the world. His works are usually entangled on a narrative, something that can challenge viewers and trigger thinking. For Bessmertny, artists have no royalties on their ideas or concepts, since viewers are free to interpret the work as they desire. And this, he says, has been happening throughout history–artists depict one thing, and crowds see something else or at least, what they want to.

Mostly focused on “good old oil” on canvas or panels, the Russian artist leaves a bit of his studio time for experimenting. From sculpture to graphics, conceptual art to kinetics, video and performance art are some of the other areas of art he explores. A Macanese artist and architect of many skills, Carlos Marreiros is best known for being the founder of Marreiros Arquitectos Associados and president of Albergue SCM, where his atelier is located. He is also one of Macau’s most well-known artists, having contributed greatly to the city’s development when it comes to the local art scene. Born in Macau (1957), Marreiros studied architecture in Portugal, Sweden, Macau, and Germany, later returning to his homeland in 1983, where he held office as an artistic director of Revista de Cultura and then as the president of Macao Cultural Bureau (1989-92). Marreiros was also a university professor at institutions in Shanghai, Hong Kong, Macau, but also Lisbon, Berkeley (USA), Milan (Italy) and others. In 2013, the Macanese figure was invited and represented the region as a visual artist at the 55th Venice Art Biennial. He is an art connoisseur and this includes literature; so much so that all his cats have famous writers’ names.

Time is of the essence and, to Marreiros dismay, is at a premium. Painting requires time but architecture takes up a lot of his schedule. Therefore, drawing is the medium the artist most explores in his work. Amongst his most well-known works is the Urbanidades series which integrates big canvases with drawings in Chinese ink depicting urban sceneries that combine reality and fiction. This resulted in meters-long drawings telling stories about imaginary worlds. The architect has one of these at his studio where the São Paulo and Santo António neighborhoods of Macau are the only historically accurate ones depicted while the rest comes from his imagination. There is one measuring five meters and an eight-meter long piece as well. Besides writing, painting, photographing and promoting culture in Macau, he was also the president of Sporting Clube de Macau, a Macanese football club. Conceição Júnior has a vast range of experiences in his career portfolio, all related to art. In the 80s and 90s, he was one of Macau’s most prominent fashion designers who traveled around the world, showing his creations on catwalks, shops and more. A. Cejunior is the name of his fashion brand.

He also published several books and articles and is known for having modernized the local cultural system. Conceição Júnior was born in 1951 in one of the oldest and most important families in the region. His mother (Deolinda da Conceição) was a teacher and a great writer who taught her son to love art and also languages. As a result, Conceição Júnior speaks fluent Portuguese, English, Mandarin, and Cantonese.

After graduating with a distinction in Painting, Design, and Communication from Lisbon Fine Arts School (1975), he returned to Macau to serve in mandatory military service. He then went on to be the first full-time director of Luís de Camões Museum, later working in an exhibition about Macau presented at the Calouste Gulbenkian Foundation. Conceição Júnior was also an art director for the Macau Cultural Institute from 1982 to 1984 and wrote several books, including Conversations of Coffee and Tea (2012) and Writings of Love and Disaffection (2015). The sports fan also has a passion for Japanese culture, having founded Bladesign, a brand of his own custom design swords, which he avidly collects. He is the youngest on this list but deserves as much attention and merit as any Macau artist. Pakeong had a rough life during his teen years, but his talent surfaced in such a strong way it was impossible for it to be unnoticed. He was born in Macau, 1978, graduated in Graphic Design (from the Macau Polytechnic Institute) and participated in more than a dozen exhibitions. A biography of the author was published in book format in 2015.

His works are now valued at millions of Patacas and there’s a good reason for that. In a surreal black and white world, the Macanese artist forges unique imageries from his imagination right onto the canvas. In his own studio or live, Pakeong prefers black permanent oil-based marker to draw the energy that spreads out from his insides. There are infinite messages, people and scenes that the artist tries communicating through his art. People can see his pieces at his studio and Porta da Arte. However, Pakeong’s talents aren’t just limited to marker and canvas. He’s also the co-founder and lead singer of local rock band, Blademark. With most of the lyrics in Chinese, the collective is a favorite amongst Macau crowds. 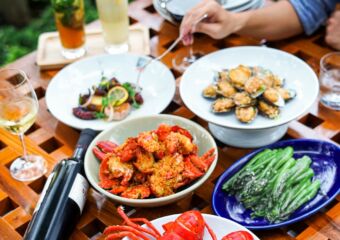