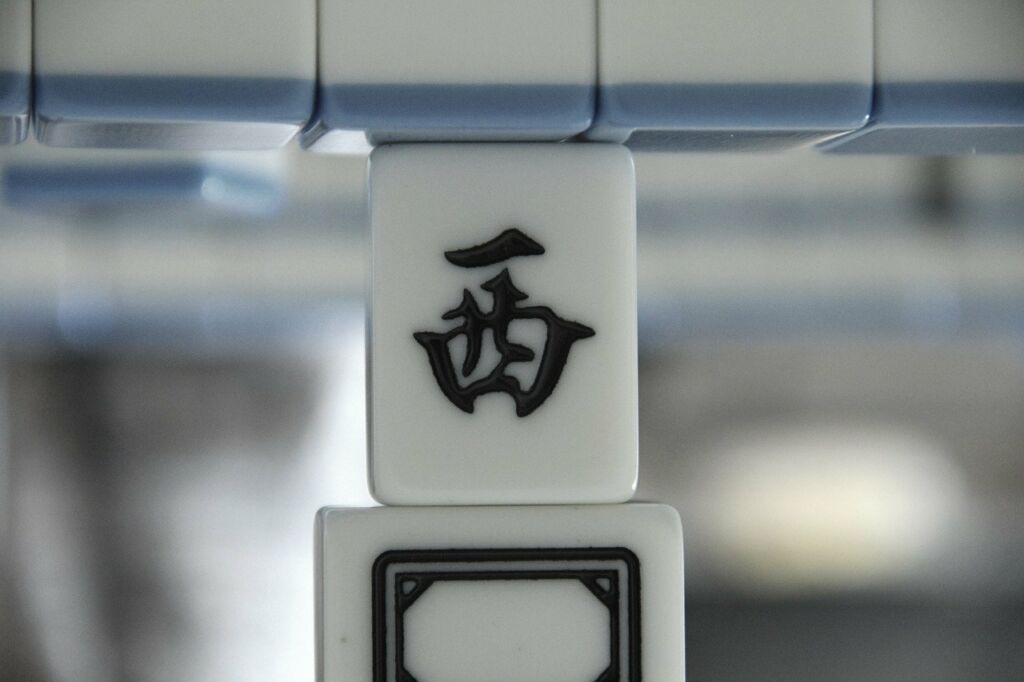 While gambling, going on a cocktails tour, or sightseeing might be some of the most common things to do around Macau these days, locals used to enjoy other entertainment activities and traditions. Some singular happenings have disappeared already, but others can still be witnessed in the older, hidden Macau corners and alleys. Because of its size, our beautiful city is lucky enough to stay up-to-date while preserving some valuable Macau traditions and details you’ll find scattered a bit all around town. Games such as mahjong or traditions like walking birds in their cages are popular amongst locals, so be observant while strolling these streets after learning all about them here!

If you happen to hear loud clickety clacks of tiles on a Friday night at your super social neighbor’s house, don’t worry: there’s probably a mahjong game taking place at their dining table. Very common across China, it’s played with sets of tiles that need to be paired together with different sequences, images, and numbers. Rules apart, mahjong was invented in China around the 1920s and some people say it’s similar to gin rummy, a cards game. Interestingly enough, this entertainment is believed to be a modern version of the oracles Chinese fortune tellers would consult. Also, mahjong is the translation of “ma jiang pai”, with the last part meaning “stone” or “piece”.

It’s not only a fun game to learn, but also a very popular one amongst Macau locals, especially at home gatherings amongst friends and family. You’ll also spot older people playing close to Chinese restaurants, old shops, and public parks during the day. One could even say mahjong is Macau’s chess! Some people play with bets, but most do it just for fun with some drinks and chatter. In the city, you will spot avid mahjong fans at public parks such as Camões Garden, the narrow alleys giving way to Rua de Tercena and Rua dos Estaleiros–downtown–and some other public areas usually popular for gatherings. Yet another Chinese tradition, bird walking is a wonderful thing to witness. Unfortunately less popular than in past centuries, this practice can still be seen in public parks and gardens all around the city. Unusual for foreign eyes, it also happens all over China. Birds are seen as their owners’ companions and as such, they need to be walked to get fresh air. There are benefits for the walkers as well: besides getting some fresh air, owners get to hear them sing in harmony with the other birds also having their daily walk.

So when did this tradition start? It’s believed to be around since the Song dynasty (960–1279), although only becoming truly popular in the 14th century all the way till the mid-20th. One of the most popular places where people would bring their singing pals were tea houses and yum cha restaurants such as Long Wa Teahouse, close to the Red Market. Curiously, this habit usually goes hand in hand with activities such as playing mahjong or cards with friends. The unique cages took months to put together, while the designers sometimes traveled hundreds of miles to find the best bamboo rods to build these artworks with. For someone who’s never seen it before, it’s a beautiful sight: dozens of nicely crafted bamboo birdcages hanging in trees and stools around parks while the wind softly rocks them and people are entertained playing games or doing some tai chi. Keeping crickets as pets was very common all around China. Although inexistent now, it became quite a Macau tradition as well, especially between the mid-19th century and the start of the 20th century. Popular amongst locals, Macau would fill up with travelers, enthusiasts, and cricket traders that would come to the city because of its gambling scene. The main combat sites were Hotel Central and private homes of known owners. The people who own the combat sites would get part of the total earnings from the bets.

According to an article from the Cultural Affairs Bureau, the best crickets to have are the noisiest ones and can be found throughout the country. Thousand of years old, cricket fights usually include bets and are disputed in the street, with their owners squatting on the street and cheering the little animals. The same document said that Chinese emperors were also big fans of crickets, even keeping them in specially crafted boxes and cages, requesting herbal specialists and doctors to care for them. Its popularity is also related to the fact that crickets were abundant in the rural world and the fields, hence allowing poor people to own them and enter these fights. If you’re really interested in knowing more about these battles and seeing some artifacts, the Macao Museum has a section dedicated to local tradition featuring some preserved crickets and even some mini-coffins built exactly to pay homage to the animals. Chinese New Year is the busiest time for these masters. There used to be a very well-known fortune teller sitting under the Senado Square arcades, to whom locals would flock to know more about their future and questions related to love, money, and other life issues. The Portuguese community also got to know him and some even followed this tradition, heading there as a ritual before the new year started. There are still a lot of locals consulting fortune tellers, which is a little strange both because they only speak Chinese and don’t advertise their mastery publicly.

Fortune telling was one of the things the Cultural Revolution abolished, but this custom came back with time. Fortune telling is practiced by throwing 70 to 100 thin bamboo sticks on a table and “reading” what they say. There are also tellers inside Buddhist temples. Devotees would pray upon entering the temple, a ritual followed by taking one of those sticks from cylindrical recipients on the floor. The devotee would then take the stick–inscribed with a number–and give it to the fortune teller (usually also selling incense) that chooses a paper with the stick’s corresponding number. These papers have messages from the gods written on them, usually related to health, finances, love, family, and more. The devotee then pays the pre-arranged amount to the fortune teller, ready to act on the gods’ advice. Although really popular nowadays everywhere else in the world, these antique tuk-tuks–or jinrickshas–are known in Macau as riquexós (in Portuguese) and have been around since the 19th century. Once one of the most common means of transportation in the region, the riquexó has now been overthrown by motorized vehicles like motorbikes, cars, taxis, and buses. According to research, these ridden cars had defined parking spots and those on the roads were obliged to transport everyone on the lookout for one, only allowed to refuse drunk passengers. Right after the Second World War, there were up to 1,000 of these vehicles circulating in Macau and around 300 in the 1960s. They used to be parked a bit all around town, especially the city center, including in front of the Octagonal Library, Rua do Campo, Avenida de Almeida Ribeiro, and other popular spots.

If you were in Macau during the 20th century, you most probably witness these running up and down the city’s main avenues, as everyone used them. However, nowadays, this Macau tradition is mostly used as sightseeing transportation catering to tourists who prefer something different. You’ll still spot some parked in front of Hotel Lisboa, but charging higher prices as they’re not sought-after that much. Today, there are just a few dozens left and a ride can cost between MOP $200 and MOP $250. For those observing tai chi practitioners in public parks and other serene places around the city, this might look like a peaceful and slow dance form rather than what it actually is: a martial art. The ancestral mastery dates back to the Chinese Tang dynasty (618-906 AC) and is based on principles of Taoism and Chinese alchemy. Also understood as meditation with movement, it focuses on mental concentration to activate the body. Although it was only introduced in Macau in the mid-20th century, it’s become a popular martial art practiced by hundreds of locals, with lots of sports clubs and schools offering beginners, intermediate and advanced classes.

Even though not familiarized with this practice, you will spot several people–usually older generations–exercising and doing tai chi surrounded by greenery and trees or sculptures. It’s indeed something that stands out when in public parks like Camões Garden, where people practice alone or in groups. Tai chi is inscribed as part of China’s Intangible Cultural Heritage. Scattered around the city, tea and herbs shops fill up old streets and alleys and are still highly frequented by locals who seek medicinal assistance or simply want a tea for a specific complaint. Although tea has become quite popular all around the world, it is part of the local fabric of Macau, Hong Kong, and China. From black to green, white to red, there’s an array of teas to try out. However, tea masters will tell you which are the best to cure ailments or help with some sort of body discomfort. There are teas indicated to drink during pregnancy or menstruation, others for people with headaches or back pain, and even more serious diseases such as cancer.

Also read: Herbal Tea Shops: One of the Oldest Professions in Macau

Aside from these dried leaves with prices ranging from quite affordable to really expensive, medicinal shops are also abundant in Macau: featuring lots of roots and plants, dried fruits, and other kinds of goodies, cultural beliefs are that these can also help and cure certain ailments. Good for body and soul, they can help with mood swings as well. Hot drinks are always preferred to cold ones, as the Chinese believe cold drinks can “freeze” the insides of your body, creating blood circulation and pressure problems, for example. Some of these stores even have herbal mixes prepared on canteens aiming for general things such as constipation, the flu, stomach ache, and more. There is a world of ancient knowledge attached to these practices and products, so why not head to some of these and get to know more about them? Considered in European countries and others as unsanitary or of low quality, street food is, plainly put, a delicacy in most Asian countries. In Thailand, tourists love to try uncommon snacks like grilled cockroaches or scorpions, but Macau hasn’t gone that far yet. Very popular throughout history until the end of the 20th century, street food stalls are usually mobile, but owners and cooks rarely actually move so customers know where they can be found. Serving deep-fried vegetables, fish, and meat but also noodles and rice noodles, dim sum items, and Cantonese style BBQ meats, these are very sought-after by locals before dinner time, when residents are on their way home and want to take away something to share with the family. We love the street stall standing on Rua dos Mercadores serving noodles and rice dishes, as well as the cheong fan one right outside the Portuguese School, usually there during the night.

Food sold through these stalls is usually affordable, filled with local flavors, and preferred by those who like Cantonese food. Another quite common kind of food is boiled goods such as vegetables and tofu, served on plastic containers with or without additional sauces. These are also popular amongst Chinese tourists looking for a quick fix while visiting the city. There are dozens of these carts across the city and you’ll easily find some on Avenida Almeida Ribeiro and its small intersections, close to Horta e Costa Avenue and the street heading from Patane to the Ponte 16 area.