Swedish Chef Björn Frantzén’s magic has been available at Altira Macau’s pop-up restaurant since earlier in October and it is a must try for all of the city’s local or visiting gourmands. The chef is the founder of The Frantzén Group in Stockholm.  Restaurant Fraztén, the fine dining headliner, was awarded two stars in the Michelin Guide, after only two years in operation. After a visit to the pop-up venue in Macau, we understand why.

The “Journey of a Nordic Chef” is an experience like no other  in Macau. It is a journey of the senses, because what you see, what you feel and what you will listen to, will be nearly as important as what you will taste. The magic will begin as soon as you enter the private dining area situated in Aurora’s terrace. A long, rustic wood table will be awaiting twelve guests, complete with an array of candles, beautiful mother-of-pearl cutlery and silver-toped chopsticks. The ceiling-to-floor windows showcase Macau’s iconic skyline, which beautifully compliments all the sleek and stylish Swedish décor. “In Sweden, people love candles”, Julia the Table Manager—also Swedish—tells us. ” It is most especially in the wintertime that we just turn off the lights and enjoy the candles”.

The 12 guests at the table don’t necessarily know each other, as places are booked individually, but the fact adds to the allure of the evening. Champagne is served and dinner, or should I say the journey, commences.

The ten-course meal feels surprisingly light and the wine pairing is made to perfection. Besides the Swedish touches—that are explained by the team—guests will pick up Chef Björn’s creativity and a strong Japanese influence. We start with a savory Apple macaron with foie gras parfait, dried rye & lingoberry—one you can only find in Chef’s native country. The crispiness of the first bite will quickly dissolve into an eclectic array of flavors, from the slight sourness of the apple to the sweetness of the foie gras. The Cauliflower chawanmushi with Hokkaido uni & wild trout roe is dish number three. Here is when you will start being introduced to the Japanese influences a culture much admired by the Chef. The dish consists of a Grilled Boullion that will taste and feel heavenly, especially contrasted with the uni—from Japan and the cauliflower—a “favorite ingredient in Sweden”, Chef Björn explains. A match between two cultures, that tastes as if it were made in heaven. Dish number six is also a spectacle of delight. By now conversation flows on the table, animated by the deliciously light Italian wine that is being served. On the background you will listen to music from the great names—Beatles, Hendrix, Clash, The La’s—and somehow all of the senses are being heightened. In front of us is now a French Toast made entirely of Winter truffles, aged cheese and a 150-year-old balsamic vinegar, that balances a truffle flavor with a touch of sweetness. A masterpiece. We cannot escape describing number seven either. Turbot with whipped vin jaune, matsutake & black trumpet . The fish is flown in fresh and tastes the part, the wild mushroom, vin jaune— a characteristic white wine made in the Jura region eastern France—and matsutake creates a feast of flavors, unlike any other, the Walnut oil and beurre moisette, complete the ensemble.

Two deserts finalize the evening. Number 9 was the favorite. The Smoked ice cream with crispy brown rice and caramelized chestnut will melt in your mouth and cloud your judgment. The textures combine perfectly and there is a saltiness that lands the desert an almost mystical flavor.

The table is now applauding the Chef and his team for an unforgettable evening.  Coffee is served and as guests leave it’s certain that they will visit the country of Chef Björn in a very foreseeable future. 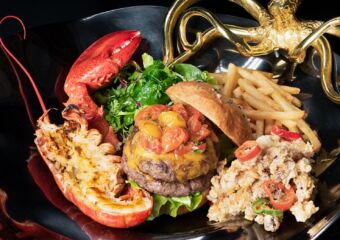