Andre Correia is one of Macau’s foremost Portuguese chefs. He graduated from the Escola Superior de Hotelaria e Turismo do Estotril in Portugal with a degree in culinary arts in 2012. He began his career in 2004 as a catering chef where he had the opportunity to travel the country and experience at first hand the many and varied styles of cooking in his homeland. It was also during this time that he discovered his lifelong passion for sourcing unique products from the many farmer’s markets in the countryside and learning to make traditional dishes from the farmers themselves.

Andre has extensive experience in Portuguese gastronomy and wines, and has represented various Portuguese brands as an ambassador and lecturer, and was a guest chef at Hotel ICON in Hong Kong and the prestigious Jockey Club.

While taking a short course at the Institute for Tourism Studies in Macau, Andre fell in love with the former Portuguese colony and has made it his home. His mission remains the same—to introduce the best regional Mediterranean cooking, from the farm and the boat to the table. 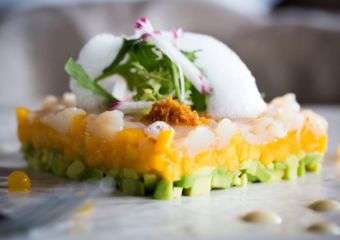 A culinary journey through the Italian countryside, the degustation menu prepared by chef Diego Ottaviani is a pure joy.