A man of many talents and a true artist at heart, Kenny is the real definition of a working creative. A filmmaker, writer, actor, photographer, editor, studio owner, the list really does go on. I’m lucky enough to call Kenny not only my friend but someone who inspires me to get out there and film stuff! Being able to interview him was not only a pleasure but as always, inspiring. Could you tell us a bit about your background?

I’m a Chinese-Canadian; born in Macau, grew up in the 6 – it’s this trendy hip term for “Toronto” (Thank you Drake!).

Where did your passion for film and production originate?

My thing for productions and creating videos began at a really young age. I would say around eight years old when a family friend bought my family a videotape recorder. I’ve been shooting with it ever since. I would shoot random things, objects and people – especially my siblings. Slowly, I wanted to do more with videos when I reached high school. I made my first music video in grade 11 and that itch was unbelievably fun and, back then, I thought I made a brilliant video. In all truth, it was wack when I saw it again many years later. It is very, very wack.

What has been one of your most memorable career accomplishments and why?

I can’t say I have a memorable career accomplishment. I can’t define accomplishments or success until I’ve made an impact in our society. I am still searching for that at the moment.

How has Macau inspired you as a filmmaker?

It’s people, it’s history. The city itself. People’s stories from this city inspire me to do something and stand up for this city. It’s wonderful. If you want to make money, you can make a lot of money in this city. If you want to do art, you need to be a bit creative and produce your work with your craft. It’s not limited to this one city, but with what one small city has to offer, imagine the possibilities when you reach out to the rest of the world.

How did shoot and chop come about?

SHOOT AND CHOP is a bold creative house (production company, but we like to call it CH). We produce commercials, film documentaries, music videos, and most importantly we produce short video sketches based on the things we see in our society. We just want to push out videos that stem from the heart and the mind. We are provocative in the videos that we release. We talk about problems in the society, we talk a little bit about what we want from the government, etc. Some people see us as a Youtube kind of channel, and that’s completely OK. I believe we have that kind of ‘funny’ to be thought of that way. We are very casual in terms of how we present ourselves to clients. We want people who interact with us to feel like buddy buddies.

With that said, we are still in the process of finding an identity for our young business. I think we are important to the city of Macau because we think differently. We are not afraid to think crazy, and we are not afraid, to tell the truth. What are some of the best things about being a filmmaker in Macau?

Funding – you could find a lot of funding and grants from local organizations and from various government sectors within the creative arts realm. Locations – there are a ton of great locations for shooting and filming in Macau. Local people just got used to some of the locations they have, most probably because this city is quite small. But then again, there are so many cool areas and they’re like small patches within our city you have to find. They could be cool alleyways, small ancient streets, modern streets and awkward looking buildings etc. There are a ton of cool things about Macau.

Will you tackle a feature film one day or are quite happy with what you are producing at the moment? What challenges would you face in Macau if you shot one?

I look at all moving visual productions as just video production. I am content with what I’m doing right now, just short videos that I post online, short docs and commercials. But it’s obvious any video maker or filmmaker would want to do something of a full-feature length one day. That is always in the back of my head. Most particularly, I want to produce more documentary movies on Macau. I don’t think it’s even that challenging to shoot a documentary movie in Macau.

I think shooting a fictional story film would be more challenging. The cast you have to enroll, the production team and members you have to recruit – I think gathering a lot of people to come together with a commitment (and not commitment is driven only by money) is the most challenging part of producing a film.

What is your advice to people who are wanting to start out in film or build a career in film and production in Macau?

How long have you been in Macau for?

I have been back in Macau for three years now.

What was your first impression of Macau when you first arrived?

The history and the old buildings made in feel in awe of this dynamic city. It is dynamic and not because of the grand scale casinos and hotels that we have here now.. it is dynamic because of how much is going on here every day.

Where do you live in Macau and why?

I live near the Ruins of St. Paul’s. I believe this is the real ‘heart’ of Macau.

What is your ideal weekend in Macau?

Walking all over the small side streets of Macau with my girlfriend Lucia. Walking and taking different paths randomly and just keep my eyes opened and looking. This is also something relaxing to do and inspiring when I look at different people interact or just doing their own thing.

What’s the first place you would recommend to a visitor in Macau? And what advice would you give to a newcomer to the city?

I don’t have a specific place but, the first thing you need to do in Macau if you’re new is to make some local friends and have them show you around town. The real Macau town. Just go out there, walk and walk and walk around! That’s the best approach to get to know and understand this city.

What’s your favorite restaurant and dish? Why?

Oh man, that’s a difficult one. I would say if I’m craving for some close-to-authentic western food, I’d go with Hard Rock Cafe. I absolutely crave Canadian/American food on a daily basis now that I reside in Macau now. If it’s a Chinese cha-chan-teng (Chinese tea restaurant), it would be those really old grimy ones that have been around for 30 to 50 years. Those are the real deal with authentic Chinese foods.

What is your formula for a great night out in Macau?

Chilling with friends sitting outside the ruins, or the Nam Van Lake, with beers bought from the convenience store.

A local Chinese catch phrase you can’t live without? 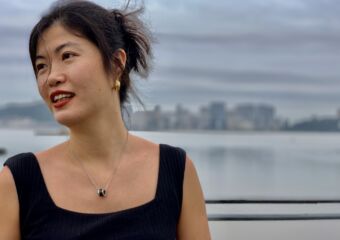