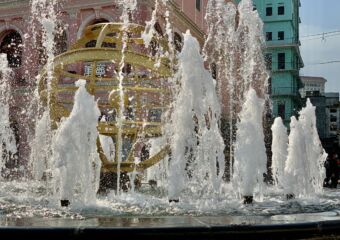 Senado Square is a paved town square in Macau and part of the UNESCO Historic Centre of Macao World Heritage Site. It is located in the central area of the Macau peninsula. There are numerous shops selling name brand goods, traditional Chinese restaurants, and cafes around the square. Fashionable clothes, famous snacks, and the scenic environment make it a popular attraction. Lion and dragon dances are usually held on special days such as the Chinese Spring Festival. We have a review on Leal Senado building, the structure that was once the city’s main political hub.

Senado Square is one of Macau’s oldest sites and had many different configurations through time. Until the start of the 90s, cars passed and parked there and the no-cars policy came after. It’s now a pedestrian area connecting Avenida Almeida Ribeiro to the Ruins of St. Paul, Rua dos Mercadores, the Portuguese Consulate and other places. It also features a series of local restaurants we included on an article.