It’s quite incredible a building like this actually exists – the flamboyant lotus-shaped Grand Lisboa Macau is a remarkable feat of human engineering and architecture that would only fit in Macau. It’s loud, brash and prominently iconic. While many new casinos and hotels have opened since the reforms of 2002, none have been as idiosyncratic as this one. The hotel was officially opened in December 2008, and it was immediately a hit. Whether you hate it or love it, there is no denying the Grand Lisboa Macau has a distinctive sense of place.

Nevertheless, gaudiness aside, the hotel certainly is a marvel to behold. It’s owned by Sociedade de Turismo e Diversões de Macau and designed by Hong Kong architects Dennis Lau and Ng Chun Man. It has 47 floors and reaches 856 feet into the sky. The MOP $3 billion complex houses 650 hotel rooms and took around three years to build.

It clearly is an icon that is impossible to miss. It definitely attracts the eyeballs from the outside – but once you’re inside it’s quite normal. It’s clear the exterior is the attraction though – when you walk by the main entrance it is quite normal to find dozens of people snapping pictures of the building. The inspiration for the bold (admirers would say sensual) shape of the structure came from the feathered form seen on the exotic carnival headdresses of Brazilian show girls, a reference to the Portuguese influence shared by Macau and South America. The top of the hotel also resembles a blossoming lotus flower, which is the official emblem of the Macau Special Administrative Region.

The extravagant design of the structure acts a guiding marker in the middle of the central part of Macau. As the tallest building it is a reference for tourists and locals alike, and its shape is part of its success. When exploring the narrow streets of Macau on foot or car, the building is a clear landmark that will help people orient themselves. The way the modern building blends with the surrounding historic neighborhoods is also quite impressive.

Like a lotus flower perched upon a golden egg, there is a large eight-story dome-shaped structure on the base of the building, which houses a grand public foyer which holds the casino and hotel reception lobbies. Inside, a massive 30,000m² casino gaming area is set over three double-height floors. There is also a large LED sign on the exterior and a programmable animated LED display runs across the exterior of the sphere.

On permanent display in the Lobby of Grand Lisboa Hotel is “The Star of Stanley Ho”, which is the largest cushion-shaped diamond in the world, according to the Gemological Institute of America. It has 218.08 carat (43.62 g) with excellent polish, symmetry and an internal flawless D-color.

As mentioned, the architects responsible for this stunning building are Dennis Lau & Ng Chun Man Architects & Engineers, from Hong Kong. They were one of the first non-domestic architects to work in Mainland China in the early 1980s and, looking at their portfolio, Grand Lisboa is most probably their most unique works. On their list is also Grand Hyatt Hotel and the Hong Kong Convention and Exhibition Centre in Hong Kong as well as several other projects throughout Asia. Whilst the lotus-shaped Grand Lisboa is their seminal work, it is also a seminal piece of postmodern architecture in Macau that does look to be topped anytime soon. Now we’ll just have to wait and see what they come up with when the Grand Lisboa Palace clears its delays and opens in Cotai in 2019. 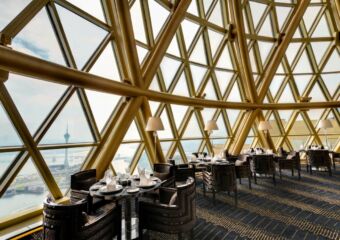