Love in White and Blue: A Canton Porcelain Story If you grew up in Macau or in Hong Kong, your mother probably had a set of white and blue china. For some this Canton crockery only saw the light of day on special occasions, others used it as their everyday china.

Whichever was the case at your house, you probably stared more than once at the nice pagoda depicted on the plate, while carefully separating your peas from the rest of your food. That plate, which often matched the soup and the serving plates, might not have seemed too exciting to you. In fact, you probably never thought about it, save when someone made you wash it. However, as everything else from this little corner of the world, that plate had a history – a two-hundred history for that matter.

China, the name leaving no room for mistake, was invented in the country with the same name. Far from being interested in glass and crystal, the Chinese had a more pressing need: keeping their tea warm. From tea cups to plates and beautiful vases, every piece was decorated perfectly. As such, the production of porcelain grew and was eventually exported to Europe through  the traditional trade routes. White and blue porcelain were said to have first appeared in the Tang dynasty. The blue was made with cobalt that was then glazed, giving it its traditional hue.

Although there are several different patterns and exports, it is reasonably known that the famous white and blue china comes from Canton (now know as Guangzhou), just next to Macau and Hong Kong, as this was the first port open to foreigners in the country. The “Canton porcelain” term refers to the china sold between the 18th to 19th centuries made in, you guessed it, Canton. These would later fill tables all across Europe, where it became fashionable to dine in two colours.

What you may not know, however, is that there’s a beautiful story hidden in one of Canton’s most famous patterns: the Willows, which is basically a more intricate version of the Pagoda pattern, and the one you most probably saw at your table as a child.

The Willows was not originally from China, but rather from England, where a number of factories soon started the business of making their own fine porcelain, and it is known as the most successful example of Chinoiserie. I mean, it lasted two hundred years. Curiously enough, the pattern travelled back and ended up being produced in China as well, where it can be found and sold to other foreign merchants. 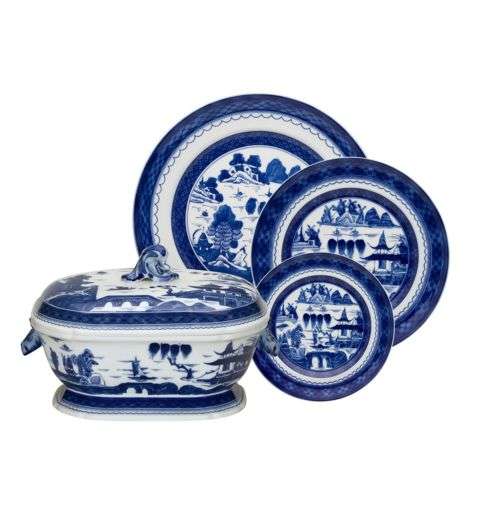 A modern-dat Vista Alegre replica of the traditional Canton set

Legend says that the two gracious birds seen at the top of the plate, are two lovers wronged by an evil emperor who wouldn’t allow his daughter to marry a commoner. When they managed to flee from the pagoda (main feature of the pattern) where the princess was held, over the bridge, the emperor’s men burned the couple’s hiding place. Two birds then emerged escaping the flames, free at last.

And, because all love stories need literature, there’s an anonymous poem to go with it:

A Chinese vessel, sailing by.

A Chinese temple, there it stands,

Built upon the river sands.

An apple tree, with apples on,

A crooked fence to end my song.

Next time you sit at your mother’s for dinner, make sure to tell her the story. Oh, and look at those birds, cute right?