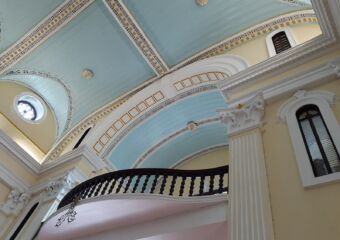 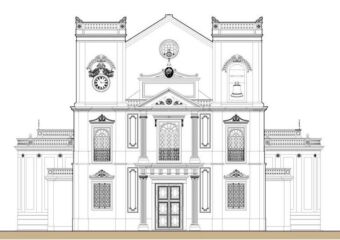 St. Lawrence Church–Igreja de São Lourenço in the original Portuguese–is a church located in the neighbourhood with the same name. The building shines in the area not only because of its bright yellow exterior walls, but also its architecture. From a colonial period, it’s built in a European style. It gathers hundreds of Catholics there for masses.

The church’s first version was built in 1560, and later replaced by more modern walls in 1618. Reconstruction using stone was finally done at the beginning of the 19th century and it’s remained quite unchanged since then, excluding minor alterations and refurbishments. It has masses available in various languages (including English), thus catering to the different communities that co-exist in Macau. For more information on mass schedules, check here.

The area features many different local businesses: from hairdressers to florists, coffee shops to restaurants, local eateries to pet shops and supermarkets, it’s mainly a residential area with several historical and touristic elements. It takes around five minutes to descend to Nam Van area, and 10 to 15 minutes to get to Barra and A-Má Temple. St. Lawrence Church is located close to Lilau Square, Lou Kau Mansion and St. Lawrence wet and vegetables market. It’s also 10 minutes away from Dom Pedro V Theatre and St. Augustine Square.

**Currently closed to public as a prevention against the spread of the coronavirus pandemic.