Source of featured image: Capturing of a female pirate during the 1910 incidents. Source: Macao Archives’ exhibition on the history of piracy in Macau (August, 2020)

No need to blink twice, you read right! Piracy is going on around the world for centuries now. It happened in Macau too, if you must know. There were pirates in Coloane and not that long ago either. Unlike their Caribbean counterparts, the pirates of the Coloane were not as flamboyant.

There was an exhibition on piracy in Macau waters, at the Macao Archives, where 62 files were used to shed light on the matter. This first investigative piece is from 1854–55 and talks about the capturing of pirates by Amazona launch boat, led by Portuguese commanders, João da Silva Carvalho and João Eduardo Scarnichia. The last process is from 1935 and it’s a request, by the Maritime department to the Canton government, to intervene and help “stop certain acts of piracy in the Chinese waters that are harming the trade of Macau”.

Besides haunting Macau’s coast, kidnapping people, and robbing cities, they also asked for ransoms and sent threats asking for money. Said exhibition showcases a letter sent from a pirate to a rich boat owner, where the felon asked for MOP $500 (a huge amount of money at the time) or he’d sink the man’s boat along with the people in it, “no matter if they’re bosses or workers”. The letter ended with “this is a very serious warning.”

Truthfully, for much of the 19th century, piracy was very common. In 1910, considerable efforts were put into saving a group of Chinese children kidnapped by pirates. These pirates lived off extorting the many fishermen villages along the coast. It is thought that they offered protection in exchange of money and would occasionally attack smaller boats for bounty. Historians believed that they were fishermen who, in times of need, turned to piracy to make ends meet. Kidnapped children & the bombing of Coloane

In the summer of 1910, the colonial government was forced to take action. However, it was seen affairs that would normally not fall under the Portuguese jurisdiction. Officially, it says that the owner of a Macanese newspaper contacted the Portuguese governor at the time after receiving a complaint. This version is contested by some Chinese historians by the way. This complaint was that a group of 18 Chinese children had been kidnapped by a band of pirates, requesting a ransom amount of MOP $35,000.

After the pirates retreated to Coloane, the governor decided to employ considerable force as the group was extremely well-armed and organized. The incident was not taken lightly by Canton, who saw it as a provocation. Coloane was not part of the Portuguese enclave and the Chinese government saw it as an attack.

There’s a monument in the main square of the village, just in front of the Chapel of St. Francis, in Coloane village. If you look closely, there’s a small text written in Portuguese and Chinese on it. The text refers to the “glorious efforts” of the Portuguese army on the 13th of July 1910. In fact, 45 men plus a gunboat called “Macau” was brought specifically from Hong Kong and attacked the island on that day. Part of Coloane village got damaged by the bombings and the local government was able to capture some of the criminals, as seen in the featured image above. The fight went on for 10 days and stopped when Marques sent word to Lisbon. The message was that all of the 310 pirates had either been captured or fled the island for good. Coloane was bombed as a result and some of its inhabitants incarcerated, charged with helping the pirates. All 18 children were saved and sent to the hospital São Rafael which is the Portuguese Consulate today.

Official exchanges within the government prove that, to some extent, the Portuguese government did see Coloane as part of its territory. Therefore, they saw no need for expansion. However, to this day, several sources suggest that this was not the view of neither the inhabitants nor the Canton government. Macau is a unique city whose population, beliefs, and even history seem to exist and cohabit parallel realities. We believe this is a major part of its charm. Beware the Woman at the Wheel

Many of these pirates were caught, either by the Macau government, Hong Kong’s or China’s. Most faced the death penalty by decapitation. The Macao Archives’ exhibition also sheds some light on this subject.

There’s also the story of a powerful and violent woman that became the best-known pirate in history. Ching Shih is believed to have been born in Guangdong, in the 1770s. According to historical records, she worked as a prostitute in a brothel in Canton. Famous boss pirate Zheng Yi raided the city and kidnapped some of the women living there into his boat. Ching captured the man’s attention, which led to them getting married later. Actually, the name that’s she’s known for isn’t her real name: Ching Shih literally means “widow of Zheng”.

Zheng was the chief of the terrifying Red Flag Fleet. The pirate would eventually die and his wife succeeded the illegal group’s leadership. Amongst Zheng’s family members was Cheung Po Tsai, also a known pirate operating in the Pearl River Delta surroundings. After being taken under the woman’s wing, Ching Shih decided to remarry, this time with her late husband’s own cousin. This way, she was able to maintain the fleet’s control.

It’s said she commanded a force of more than 40,000 pirates in 300 Chinese junks. She fought battles with both the British and Portuguese empires, as well as with the Chinese Qing dynasty, becoming known as one of the most feared and successful pirates in history. The Macao Archives exhibition mentions a female pirate who’s haunted the nearby seas for decades.

This article was originally written by Raquel Dias in 2019 and updated by Leonor Sá Machado in November 2020. 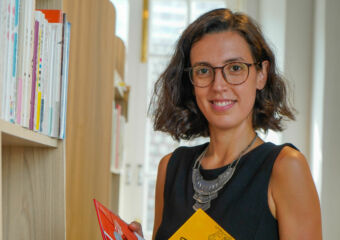