Antonieta Manhão –best known as Neta–is a chef born and raised in Macau, determined to take Macanese cuisine to the four corners of the world. We met at her cooking studio to know more about this exquisite fusion food, how it is to be a female chef in a man’s world and the secrets of Macanese cuisine. She is currently doing an eight-week residency at The Manor at The St. Regis Macao to oversee their improved Cha Gordo menu–one of the only places in Macau to have this authentic cultural experience by the way.

You are one of Macau’s best known chefs when it comes to local cuisine. How did it all begin?

Since I was a kid, I was fascinated by what my mother, aunts and grandmothers did in the kitchen. They cooked all these complex and comforting food dishes, and most of the time without needing a single recipe. They knew it by memory. Unfortunately, they never let me near the knives or the stove because it was too dangerous. I’ve never even thought of becoming a chef–or ever imagined I’d be one now–until I took interest in Thai food. That’s when I went to Chiang Mai and took a course.

How did you go from Thai food to Macanese cuisine?

When some of my family members passed away, I felt the need to revive this kind of gastronomy. Macanese food is comforting and keeps so many good memories alive. It is a very typical food for Christmas, Easter and other celebratory seasons. And most importantly, I missed it so I felt the need to keep it alive.

So now you own a cooking studio where you teach Macanese recipes?

Yes. But I started by conducting Thai food classes, because that was my area of expertise. The interest for Macanese food lessons only started about five years after. The trick is to teach people to cook with ingredients you can find at home and this could prove to be difficult. It’s kind of pointless to teach people with recipes made up of ingredients you can’t find in Macau, for example. After a while, people started asking me for more classes, and so I gave them.

But Macanese cuisine is being elevated like never before, don’t you think?

Macau is keen on Cantonese and Portuguese restaurants, but there are very few Macanese ones. Yes, Macanese cuisine is getting better but the food is still not good enough. The recipes are tailored to the liking of customers, and therefore not exactly like it should be made. There are maybe four or five restaurants worth going for Macanese food.

So what do you teach in your classes?

Easy dishes and sometimes, more complex ones. For me, the most important thing is to teach my students so they’re able to do it at home for their families–this is key. Nowadays, we are constantly holding our cellphones while having a meal so we never talk to each other. I want to bring that back.

You are also a member of the Confraria de Gastronomia Macaense (The Brotherhood of Macanese Gastronomy), which is part of a European gastronomy brotherhood. Does that mean you’ve been spreading Macanese at the global stage as well?

Yes, that is my main goal since I have become a chef and an instructor. In a year, I can go to several places to spread the word, do demonstrations, and cooking shows. I became a member in 2016 and feel really lucky to be able to be part of the brotherhood, spreading Macanese cuisine around the world. There are several meetings and conferences, in fact, this year it takes place in Algarve, Portugal and last year, Athens. We were also in Malaysia and other Asian countries to demonstrate and explain to people what Macanese food is all about.

UNESCO awarded Macau the Creative City of Gastronomy status. What does this mean for Macanese cuisine?

It is a big step, but there is still a lot to be done. It is a great honor to Macau and I want Macanese cuisine to be recognised for its true value. Macanese cuisine deserves much more appreciation and representation in Macau. How can this be bettered?

In these past 400 years, we were the first ones to explore gastronomy in a way that resulted in the first fusion cuisine in the world. Letting the world know is the best way to teach people its true value. However, there are still flaws. It’s good for Macanese food to be known worldwide, but it can also have a negative side. Restaurants are making recipes up, coming up with different flavors, a taste that has nothing to do with the original recipes.

Well, first, there is an enormous lack of restaurants serving good Macanese food. Secondly, our teaching school, IFT, is one of the only places in Macau teaching this and the restaurant is closed on weekends.

Where do you generally find traditional Macanese recipes?

Mainly, from my aunts who are still with us because there aren’t a lot of recipes that have been recorded on pen and paper. Some members of the community are illiterate and they don’t measure the ingredients when they cook. The ingredients are mixed according to experience. I had to do a lot of fieldwork where I asked around and did plenty of research as well. This research started in the 90s!

What are the three things you have to have in your kitchen?

Soy sauce is key along with salt, pepper and sugar. Portuguese chorizo is also very common for capela–Portuguese-style meatloaf, pine nuts and a lot of spices from the Silk Road.

The gastronomic world is seen as a man’s world. A man that cooks is a chef, but a woman doing the same is generally perceived with less value. What is it like to be a female professional in a man’s world?

That is definitely true, but there is a historic reason for it. For years on end, women were the ones staying at home, taking care of the kids and the household. Men had time to go to school, and some went one to learn how to cook, thus becoming chefs by improving their skills on their free time. However, I believe this is changing. From my experience, men are better known for gourmet food, and women usually go for more traditional dishes. Currently, there are more men (chefs) with their names out there because they’ve completed their studies but I am sure this tendency will shift 10 years from now.

Macau has a lot of different eateries and offers a wide range of cuisines. Where do you like to eat when not at home or your studio?

For Macanese food, it can be quite difficult. For a regular, everyday meal, I like going to the foodcourts in the markets! San Ma Lo and Patane markets have a great variety and one can eat different dishes everyday!

You are truly a child of Macau, born and raised here! Are there any special memories you cherish?

Sure! I had a very happy childhood. I particularly remember living in the building that is now the Red Market, because my grandfather was a fiscal officer for the market. None of those buildings in front were there and ours was the last one before the river. I vividly recall heading to the balcony, every day at 4:00pm, to see the cows and oxen walking towards the slaughterhouse.

Chef Antonieta Manhão teaches at her Neta Club regularly, but she is often out spreading the word about Macanese food, so be sure to confirm–via Facebook or email Antonieta Manhão ([email protected])–when will she be giving her next classes. The studio also provides private dinners and takeaway food!

Try out The Manor’s revamped Chá Gordo menu with Antonieta Manhão, every Saturday, from 3:00pm–6:00pm. Read about our experience here.

Brought to you in partnership with The St. Regis Macao, Cotai Strip 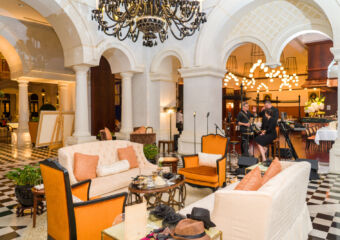 Aux Beaux Arts: A Delicious Taste of France Right in the Heart of Macau 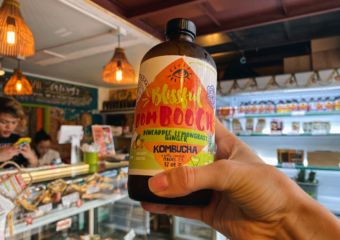