Macau–as any developed city–is ever-changing, so it comes as no surprise that shops and restaurants, boutiques and other things are always coming and going. The same happens to buildings, but also traditions, crafts, and costumes. Here, we show you some photos that will take you to old Macau in another century. From a busy fishermen Coloane village to Cotai with a simple road, this is a glimpse of simpler times in Macau.

This photo is believed to have been taken sometime around the mid-20th century and features a group of people with fishing nets in what is clearly the waterfront area of Coloane Village, close to Lord Stow’s and the health center. Shipbuilding and fishing were crafts contributing greatly to Macau’s economy back in the day.

Having started in the 1850s, peaking around the 50s of the 20th century and lasting until 2006, shipyards were an active part of the city and employed hundreds of people, as the firecracker industry did. Fishing was also a very popular industry, with hundreds of families working in it. It eventually disappeared as well. This photo show workers untangling fishing nets together. Can you even imagine busy, wide and colorful Tap Seac Square with nothing but sand? Difficult, but it’s right there! Before its latest refurbishment, this area was a football field for decades. Kids would crowd the place and those who passed through would know that laughter and children playing were a natural thing to hear.

Now converted into a big square where people can relax, take a stroll and where various events take place, Tap Seac Square used to look like this in the 30s and 40s. The photo was taken by local photographer Lee Yuk Tin, who took an incredible collection of shots of the city across a series of decades. The building with the arched entrances is the first version of what is now the health center, the Macao Archives, the art gallery, and the Central Library. We finally understand where the “three lamps” designation comes from! This small square has always had a three lamp structure in the middle, which you can still find among all the hustle and bustle of the area as it is one of Macau’s busiest places.

It sits close to Fai Chi Kei, Kiang Wu Hospital and the Red Market, so it’s home to fruit and vegetable vendors, but also fresh flowers and a lot of other businesses, some of them becoming rare in Macau, such as watch shops and dealers. Three Lamps Roundabout used to look like this sometime in the mid-20th century. Doesn’t it look lovely? It reminds us of scenes from old romance movies, with lengthy courtships and flouncy dresses. 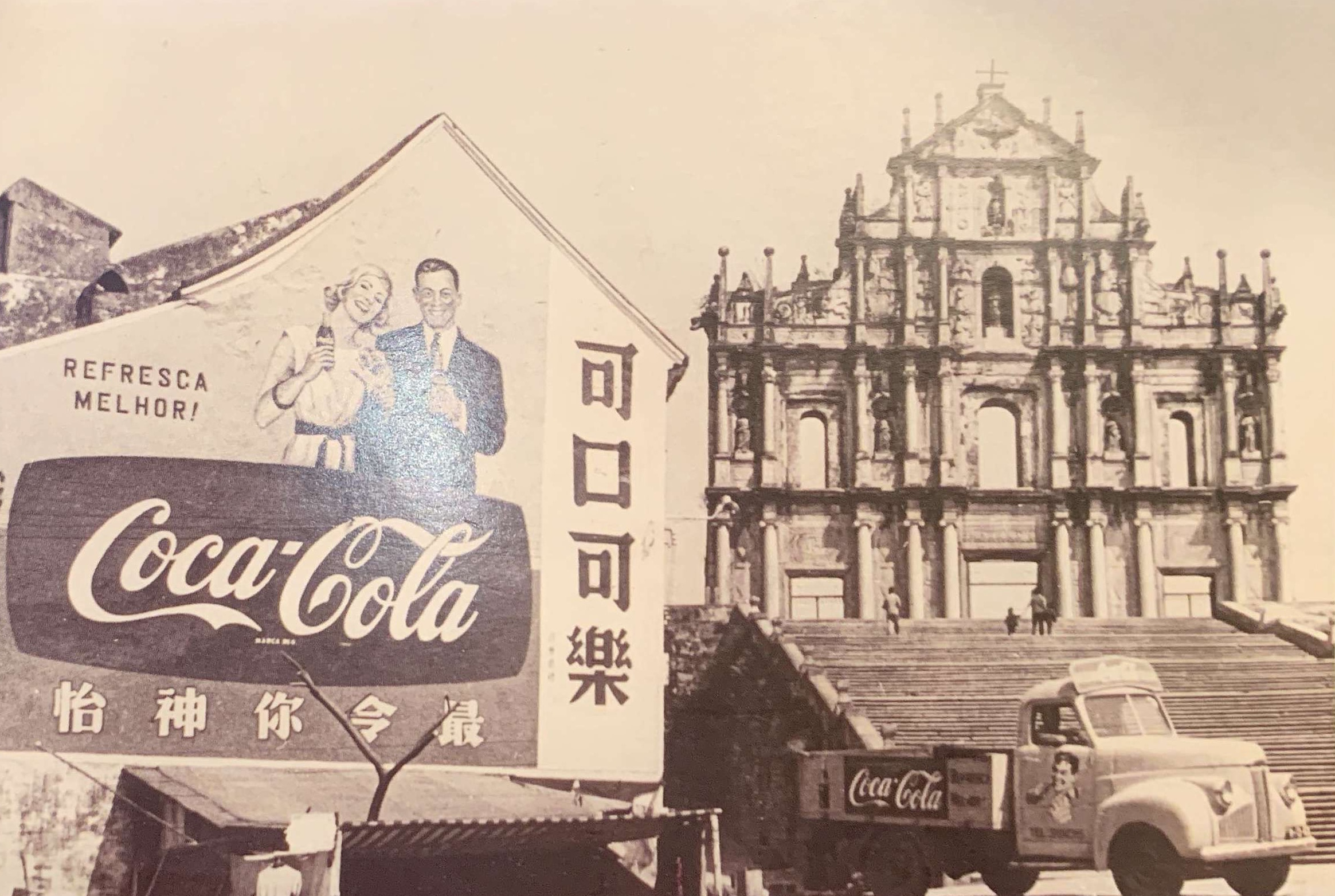 One of Macau’s most iconic monuments is the Ruins of St. Paul’s, the only remainder after a fire claimed the whole church. The façade was kept alive and after maintenance, it’s now one of the most visited places in the city. It’s usually crowded with tourists and curious people, taking photos and striking poses. Besides the structure itself and lots of people, one can barely spot anything else when looking up from the stairs.

This photo from the 50s is a great reminder of simpler times and shows a Macau one can hardly see nowadays: the truck is a beautiful thing to see, especially with the huge Coca-Cola ad! After all, this shot was taken from a celebratory edition postcard issued by the company itself in 2007. “It freshens better!”, one can read in Portuguese letters. See those columns with Chinese characters? That is now the Longines flagship store, in St. Dominic’s Square! Quite unbelievable, right? That area is now traffic-free and has been paved with Portuguese cobblestones, while the church with the same name is now painted in bright yellow.

This photo was taken sometime in the 50s of the 20th century and represents a time where people and cars coexisted harmoniously in the city center. Portuguese expats usually got their groceries from a small shop located on one of these streets, where they sold codfish, spices, and canned tuna, amongst other goods. Before casinos outside the peninsula were even dreamt of, Cotai looked like this. This was the road connecting Taipa to Coloane, a trip that before 1969 could only be done via boat. It would be difficult to picture a two-lane road where now sits a proper avenue and no water in sight, just modern buildings filling the sky with entertainment and lights.

This road was completed more than 50 years ago and was one of the greatest achievements then since it finally allowed people to head to Coloane without having to cross water. Fun fact: there were several ideas for Cotai before it became Macau’s casino capital. One of the drafted projects included lots of government and public use facilities such as a school and a sports center. Bullfights may not make much sense nowadays, especially because of the suffering they cause to animals. However, it was a very popular recreational activity in countries like Portugal and Spain (where it is still quite popular). Being so, Portugal decided to bring it to Asia, thus introducing the sumptuous show to locals and Portuguese living in the city.

The square–made of bamboo–was built close to S. Francisco Barracks, where now stands the police station. The first-ever Macau bullfight took place on August 1, 1966 and was made possible thanks to Portuguese businessman Alfredo Ovelha and Stanley Ho’s STDM, who sponsored the show. Off the Beaten Path: Chou Kei