January is full of different activities and events to attend, and this weekend is no different. Head to Vida Rica Bar to experience a Battle of 2 Burgers, enjoy northern Italian cuisine at Bene’s Food & Wine Mercato, reserve a seat at the Macao Cultural Centre to see Joyce DiDonato perform, enjoy the last days of the Retro Macau Game Expo, or buy tickets to the 18th Macao City Fringe Festival. Read on to find what the city has in store for you!

THE BATTLE OF 2 BURGERS: WAGYU VS SEAFOOD

From January 11 to 20, 2019, Vida Rica Bar will have a “burger battle”! Whether you are a meat enthusiast or a seafood lover, the restaurant offers juicy Wagyu beef burger with foie gras and truffle as well as the a savory seafood burger with Tobiko caviar. The menu includes a drink, so gear up to fight this battle while enjoying the amazing view! The Food & Wine Mercato begins the New Year featuring ‘The North’ – cuisine from the northern parts of Italy that is renowned across the world for its rich and hearty dishes that showcase some of the highest quality ingredients. ‘The North’ at Bene Food & Wine Mercato will feature dishes that reflect the northern Italian landscape – mountainous terrain at the foot of the Alps with green pastures ideal for cattle grazing and a focus on dairy. Northern Italy is home to some of the best cheeses in the world which is reflected in many of the northern Italian dishes being featured at the Mercato. Retro Macau Game Expo is Macau’s first and largest event dedicated to the history of video games, featuring 100 retro video games and an arcade area provided for hands-on experience. World-class retro games tournaments will be featured, including “The King of Fighters ’98” and “The King of Fighters XIV” with tournaments to be streamed live on various social media platforms. The winner will receive some prizes and cash, as well as a chance to represent Macau to compete with players worldwide. There will also be an exclusive reveal of some rare console devices! The Macao Cultural Centre is celebrating its 20th anniversary and the New Year with a number of shows, starting with a concert by Joyce DiDonato. The North American opera diva is supported by Il Pomo d’Oro, an ensemble specialising in works from the baroque period, and which is conducted by Maxim Emelyanychev. In War & Peace: Harmony Through Music presents a collection of arias, with works by English composer Henry Purcell, German genius George Frideric Handel, and the Italian creativity of Leonardo Leo. DiDonato’s In War & Peace tour has featured performances at some of the world’s most prestigious venues, including New York’s Carnegie Hall, London’s Barbican Centre, the Berlin Philharmonie, and the Théâtre des Champs-Elysées in Paris. The 18th Macao City Fringe Festival invites us to rediscover the exceptional in everyday life, and to discover theatre spaces in every corner of the city, liberating creativity, injecting changes to daily life, and ultimately turning art into a daily routine.

The 18th Macao City Fringe Festival, organized by the Cultural Affairs Bureau, features a series of outreach activities, including workshops, talks, art critique and sharing sessions, bringing the audience a rich programme of activities and diverse artistic experiences. It will take place from January 11 to 27, 2019. “Macao Light Festival 2018 – Time Travel in Macao” will be staged until 20 January 2019. Revolving around the concept of time, the Festival will weave up local elements of gastronomy, humanity, architecture, culture, creativity and other realms. There will be three different routes expand through the city.

The event will not only manifest the city’s East-meets-West cultures, but also portray nostalgic stories and childhood memories of Macau, leading spectators onto a glittery journey across time and space in Macau. More gastronomic elements are added to the programme and routes of the Macao Light Festival in line with the “2018 Macau Year of Gastronomy” kick off by the government. Five projection mapping shows will be staged at three locations, along with an itinerant projection show at the Taipa Municipal Market. Local artist Chan Hin Io will have his works exhibited at Taipa Village Art Space in a showcase starting December 5, 2018. The venue will be filled with photos taken with a drone, allowing people to see the city from a different perspective. Get a bird’s eye view of the city and check out this exhibition organized by the Taipa Village Cultural Association. 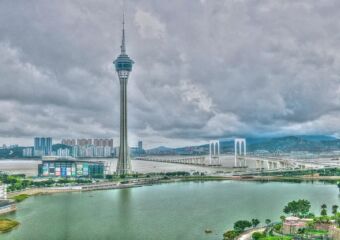 How to Support Macau Local Businesses During COVID-19